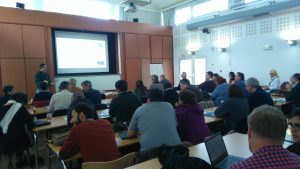 Project progress and future orientations were discussed by all partners.  In total 46 representatives participated in the meeting representing all 23 organisations and research groups involved in the project. The external advisory board members joined the general assembly session in the afternoon to get an overview of the course of the project and gave valuable feedback.

During the meeting, an overview of the activities performed since the kick-off meeting was presented (e.g. set-up of project management tools and procedures, development of the first set of communication tools and preliminary results of the growers consultations) together with the action plan for the next months. Of particular focus this meeting was the link between WP3:Benchmark on current technology and distribution and WP4:Transfer of innovative technologies to the horticultural sector and future steps

The next General Assembly Meeting will take place in The Netherlands on October 2017, followed by our second workshop.