Over the last three years, more than 350 European farmers have been surveyed to identify the gaps that prevent meaningful incorporation of innovation on a farm. 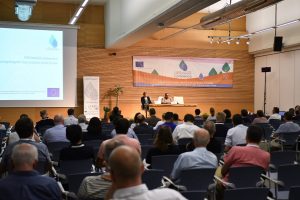 Almería, October 5, 2018. The FERTINNOWA thematic network has created an effective working model to successfully transfer new technologies to producers and eliminate the gaps that have until now, prevented the incorporation of innovation into agricultural practices. During the last three years, the FERTINNOWA consortium has conducted a survey of more than 350 producers from different European regions and has identified the most efficient fertigation technologies. This should help to meet the sustainability, economic and environmental challenges faced by the European agriculture sector.

Conducting surveys at a European level allowed the consortium to obtain reliable results, to characterise existing technological gaps in different regions. These gaps were then evaluated, to see which technologies could be capable of resolving the problems identified by the survey, at a local level. Thanks to these methods, the real reasons why farmers do not implement new technologies were identified. For the first time, it was shown that across Europe, producers feel that the technologies available cannot be adapted to meet their specific needs.

In addition, the methods used by FERTINNOWA included a comparative analysis of different technologies, whether already available or close to commercialisation. Each technology was reviewed and written in an accessible way for those who may not have a lot of technological expertise. These reviews also include information on the operating and capital costs of each technology, which have proved useful to producers in their decision-making. These have been the two fundamental axes of the project, which has generated a huge amount of information readily available on the web through a European map of technology exchange, databases and the ‘Fertigation Bible’. 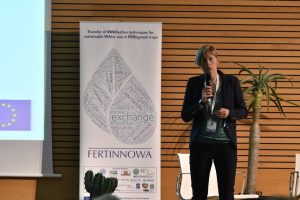 Yesterday during the closing of the FERTINNOWA Final Conference, the coordinator of the project expressed her satisfaction with the results obtained, saying “the legacy of FERTINNOWA will continue because we have left the agricultural sector an important source of knowledge in the ‘Fertigation Bible.’ New projects around the world will be inspired by our methodology, setting an important precedent,” according to Els Berckmoes.

For his part, Rafael Peral, General Secretary of Agriculture and Food of the Government of Andalusia, stressed the importance of the future Common Agricultural Policy (CAP) to maintain subsidies to modernise irrigation methods: “The European Commission must recognize that they are necessary for the creation of employment and wealth, and for the continuing presence of people in rural areas.” At the close of the day, the Spanish company Ispemar received the ‘FERTINNOWA Prize for Innovation 2018’ for ‘Trutina’, an innovative system capable of measuring the weight difference in plants due to water transpiration.

In the block of presentations dedicated to reducing environmental impact in water and fertiliser use, energy efficiency in desalination was the theme of the talk by Veolia Spain. Veolia Spain operates a seawater desalination plant that produces 30  cubic hectometer (hm3) per year for water supply and irrigation in the west of the Almería province. This plant, located on the coast of Balerma (El Ejido), has managed to reduce the energy consumption of the reverse osmosis process by 45%, from 3.5 kWh/m3 to 2.7 kWh/m3. It is equipped with a second phase of treatment specially dedicated to the quality of water destined for irrigation, ensuring that boron levels do not exceed 0.5 parts per million (ppm).

Among the novelties presented on the day was a study by Wageningen University that used electrodialysis to remove sodium from leachate in soil-less cropping systems, and a project developed by company Aqualia in Almería that produced bio-fertilisers by using microalgae to treat water. Also presented was the E-PHOS® project, which explored ways to reduce sulphates in water, as well as new filtration techniques for drainage water using paper filters in closed systems. 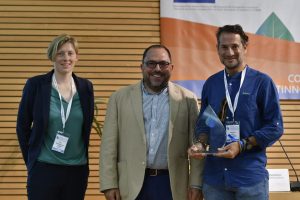 The Spanish company Ispemar received the Fertinnowa Award for Innovation 2018.

Following the last day of the conference, there were field visits for delegates to areas of the Almería province with very different farming systems; the Levante and Almanzora regions. Greenhouse crops were seen (in soil and substrate), as were field crops, seedbeds, citrus farms and a manufacturer of agricultural plastics. In addition, participants got a guided tour of the desalination plants ‘Campo de Dalías’ and ‘Carboneras’.

Some thirty researchers have already started translating the almost 900 pages of the ‘Fertigation Bible’ into Chinese. The objective is simply to offer the Chinese agricultural sector all the knowledge gathered in Europe for the improvement of fertigation, reducing water consumption and the negative impact of fertilisers. “It is clear that China will soon become an emerging market for the latest technologies in fertigation, and we will be very gratified if the work of FERTINNOWA helps Chinese agriculture become more environmentally sound,” said Els Berckmoes. “The Chinese population is growing rapidly and the country needs to increase its production capacity, and this is where fertigation plays a fundamental role in intensifying food production efficiently and sustainably.”

That the Chinese agricultural sector is embracing FERTINNOWA’s outputs highlights that challenges related to efficient water and fertiliser use are global, and affect millions of producers. They have to produce more food in an environment increasingly affected by climate change and to meet the demands of large distribution chains who want food certified as being sustainably produced. For this reason, it is envisaged that new research projects throughout the world will use the knowledge generated by FERTINNOWA, as well as its innovative methodological approach.

FERTINNNOWA is a thematic network oriented to the transfer of innovative techniques for a sustainable use of water in fertigation. With this purpose, FERTINNNOWA collects, exchanges, displays and transfers good practices and innovative solutions for a more efficient use of water and nutrients that reduces the environmental impact associated with fruit and vegetable production systems in fertigation. For the development of the project, a direct link with producers and producer organizations, with communities of irrigators, responsible for public administrations, with NGOs, environmental organizations and consumer organizations is essential. All are part of the External Advisory Committee of FERTINNNOWA, a consulting body to evaluate the evolution of the project and its results. 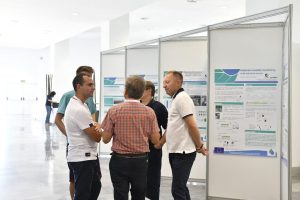 The FERTINNNOWA project has European funding within the framework of the research and innovation promotion initiatives included in the Horizon 2020 program. The Spanish participation is represented by the Andalusian Institute of Agricultural and Fisheries Research (IFAPA), Fundación Cajamar, Universidad de Almería, Center for Scientific and Technological Research of Extremadura (CICYTEX), Navarra Institute of Technologies and Infrastructures Agroalimentarias SA (INTIA), and the Valencian Institute of Agrarian Research (IVIA). In addition, public and private entities related to agricultural research and innovation from Germany, Belgium, Slovenia, France, Holland, Italy, Poland, the United Kingdom and South Africa participate in the project.

This site uses profiling cookies for the various purposes illustrated in the cookie policy. If you want to know more or withdraw your consent to all or some of the cookies, please refer to the cookie policy. By closing this banner, scrolling this page, clicking a link or continuing to browse otherwise, you agree to the use of cookies. Following the entry of the EU Regulation 2016/679 (GDPR), we have amended, integrated and updated the section dedicated to the processing of data on privacy and cookie policyOkRead more