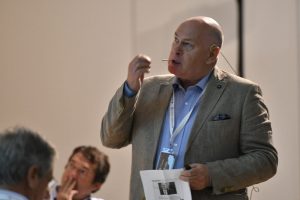 Almería, October 4, 2018. One of the main risks presented by climate change to global food production is the availability of water. Providing sufficient food for a growing population will increase agriculture’s demand for water worldwide by up to 60% in a few short years, according to FAO data. “9% of the world’s food comes from areas with overexploited aquifers and more than half of the population lives in areas with high water stress”, explained Professor Julio Berbel from the University of Córdoba. Faced with this situation, the European irrigation sector must react in three ways: reduce water consumption, avoid the depletion of underground water reserves, and increase fertigation efficiency via the incorporation of new technologies that reduce the environmental impact of agriculture.

The Sustainable Development Goals (SDGs) are the new benchmark for all links in the food chain and will underpin the debate on the use of water for food production, up until 2030 (when the SDGs are to be achieved). Luc Peeters of the phytosanitary working group (of COPA-COGECA in Brussels), said: “an important debate is already underway on how to fit water use into the new principles expressed by the SDGs, particularly on the quality of reused water, whose certification will incur an extra cost for the irrigators “.

Currently, the main quality standards in the fruit and vegetable sector take the chemical and microbiological quality of water into account, although it is now a higher priority for food safety and contamination risks, rather than for efficiency. “It will be the next step; in the short term the main quality standards (that must be met to sell to the big marketing chains) will also need to demonstrate that the water we use to irrigate is from sustainable sources, and does not come from, for example, overexploited aquifers”,  according to Antonio Marhuenda, from the Murcian distributor Agrasa. This was supported by “Markets demand sustainable, resilient and reliable supply chains. Therefore, it is our obligation to adapt to these new requirements and demand them from our suppliers, since it is impossible to offer quality food if they have not been irrigated with quality water”. 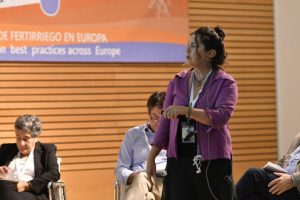 During the roundtable held this morning, the ‘New Culture of Water’ Foundation highlighted the need to analyse the water issue using a holistic and systemic perspective, always taking into account the consequences of agricultural production for ecosystems, rivers and natural resources. In light of this, the professor of the University of Almeria and president of the New Culture of Water Foundation, Abel Lacalle, has urged the Spanish public administration to offer official data on water savings achieved through irrigation modernisation plans, “it is a significant contradiction that the agricultural sector participates in the debate about action to address climatic change, while at the same time, the majority of agriculturalists continue to irrigate in the same way, without implementing solutions”. Julia Martinez, the technical director of the New Culture of Water Foundation, revealed the extent of the diffuse pollution in the Mar Menor (Murcia) as a clear example that “technical innovation in intensive agriculture is not enough to reduce its environmental impact, if it is not accompanied by a larger scale vision that allows us to understand the environmental consequences of agriculture in the whole of a production area, rather than just at the farm level”. 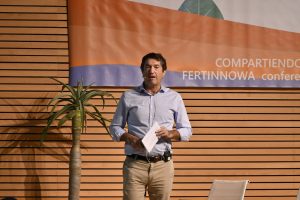 Representatives of the irrigators responded, asking for more robust data from the environmental organisations which have criticised farmers’ perceived lack of interest in the environment. “The Spanish irrigators are committed to good practices and efficiency in fertigation, so it is not fair to say that we are not saving water with modernised irrigation systems. Real data from the fields needed before drawing false conclusions and turning an exception into a general representation”, according to Juan Valero, general secretary of FENACORE, who is responsible for making Spain the second in the world in terms of percentage of land irrigated (second only to Israel).

As an alternative water source in coastal areas, experts agree that the importance of reclaimed water must be recognised, as long as it meets the required quality requirements. In light of this, Rafael Casielles of BIOAZUL announced that the next EU directive that will come into force in 2019 will be much more restrictive than the current one, especially concerning the parameters related to microorganisms. However, “there is no fear of restrictions with respect to micropollutants such as medical residues, due to the fact that to date there is no conclusive scientific study on their harmful effect on human health”. According to the data offered by BIOAZUL, reused water sources can provide producers with savings of up to 0.12 €/m3, since their high nutrient content reduces additional fertiliser requirements.

Reducing nitrate pollution is one of the great challenges for the agricultural sector, and one of the issues that experts are most concerned about. To achieve this reduction and comply with European directives, several research projects have been developed with the objective of reducing the nitrogen supply to the plant, adjusting the doses to actual plant needs and thus helping to minimize the problem. The number of zones vulnerable to pollution by nitrates is currently growing in Spain and other European regions. 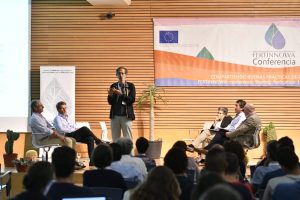 Abel Lacalle, president of the New Culture of Water Foundation.

One of the positive strategies for reducing nitrate pollution is based on correctly estimating the contribution of soil-to-crop nutrition, according to Josefina Maestu, from the Ministry for the Ecological Transition, who presented the results of the ‘LIFE research project: Nitrates’ developed in Navarra, Spain.

Another alternative was highlighted yesterday by Dr. Teresa Lao, from the University of Almeria, who confirmed that so-called ‘cascade crops’ can reduce contamination by nitrates to zero. Cascade cultivation consists of growing several crops without soil at different height levels, so that the leachates produced by the crop that is highest flows down, fertilising the next crop on the next, lower level, and so on. Similarly, Professor Rodney Thompson (UAL) stressed that new technological tools and software are already going through a validation phase, and are being tested in several Spanish regions with the aim of incorporating them into efficient fertigation management strategies.

Also presented was a project developed by CICYTEX which optimises the configuration of sampling points on large farms with soil variability, by using images received from the Sentinel satellite. These images are updated every three days. By using this satellite information, it is possible to optimise soil sampling points, and to know the degree of vegetative development of the plants in each area of the farm. Consequently, real-time needs in nutrient and water supply can be calculated.

Maximizing strawberry production and reducing operating costs is now possible with an innovative system called ‘NGS oscillation’. With this system, it is possible to plant up to 100 000 more strawberry plants per hectare, which is a significant increase in productivity. The innovation comes from circulating water inside plastic trays to promote root development and favour the growth of the aerial parts of the plant and, consequently, the production of fruit.

The company Verdesmart confirmed that stress suffered by plants reduces the capacity of nitrogen absorption and increases the consumption of potassium. Thanks to the tests carried out in a tomato farm located in Níjar (Almería, Spain) it has been discovered that optimal management of potassium and nitrogen levels causes an increase of up to 11% bigger fruits.

FERTINNNOWA is a thematic network oriented to the transfer of innovative techniques for a sustainable use of water in fertigation. With this purpose, FERTINNNOWA collects, exchanges, displays and transfers good practices and innovative solutions for a more efficient use of water and nutrients that reduces the environmental impact associated with fruit and vegetable production systems in fertigation. For the development of the project, a direct link with producers and producer organizations, with communities of irrigators, responsible for public administrations, with NGOs, environmental organizations and consumer organizations is essential. All are part of the External Advisory Committee of FERTINNNOWA, a consulting body to evaluate the evolution of the project and its results.

The FERTINNNOWA project has European funding within the framework of the research and innovation promotion initiatives included in the Horizon 2020 program. The Spanish participation is represented by the Andalusian Institute of Agricultural and Fisheries Research (IFAPA), Fundación Cajamar, Universidad de Almería, Center for Scientific and Technological Research of Extremadura (CICYTEX), Navarra Institute of Technologies and Infrastructures Agroalimentarias SA (INTIA), and the Valencian Institute of Agrarian Research (IVIA). In addition, public and private entities related to agricultural research and innovation from Germany, Belgium, Slovenia, France, Holland, Italy, Poland, the United Kingdom and South Africa participate in the project.