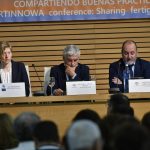 More than twenty innovative fertigation technologies have been exchanged between different European regions thanks to FERTINNOWA, the European fertigation knowledge transfer platform involving experts and researchers from ten countries. This exchange of new technologies is the result of three years of research carried out by FERTINNOWA, which identified innovative technologies throughout Europe for their ability to optimise water and fertiliser use. Although used by some, these technologies were relatively unknown in certain regions.

By promoting the exchange of new technologies between different regions, FERTINNOWA fulfils its main objective: to bridge the gap between the world of research and the daily reality of the grower, making new solutions available to them that can be adapted to their needs, and in any horticultural crop, whatever the growing system. “Not only have technologies from the agricultural sector been exchanged, but also from other areas such as medical research, for example, photocatalytic oxidation, which has been transferred for use in fertigation”, as Elisa Suárez-Rey, researcher of IFAPA, highlighted during her presentation.

During the first day of FERTINNOWA’s Final Conference, the ‘Fertigation bible’ was presented in Almeria, an ambitious report that gathers the descriptions, analysis and environmental and economic evaluation of 124 fertigation techniques used by growers throughout Europe. With 814 pages written by 54 authors, this is the first compilation of this type that is published at a European level with the aim of transferring practical information in an accessible way to all stakeholders involved in fertigation. 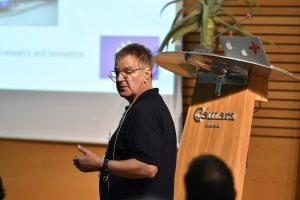 Rodney Thompson, of the University of Almeria, during his presentation.

The “Fertigation Bible”, which is already available in English on FERTINNOWA’s website, gives an extensive overview of each of the described technologies; highlighting the regions and crops where it can be used, how it works, operating costs, and the benefits and bottlenecks faced by the grower. In addition, data from the manufacturer or supplier is included, as well as whether a technology is already commercialised or still under development.

Irrigation is wealth and employment

At the beginning of the day, Jerónimo Pérez Parra, the president of the Andalusian Institute of Agricultural Research and Training and Fisheries (IFAPA), emphasised that “irrigation is always linked to the creation of wealth and employment and, therefore, is a very useful tool to avoid rural depopulation”. IFAPA pointed out that even though irrigated protected crops only represent 0.2% of the cultivated area of Spain, the sector contributes 10% of the value of the Final Agricultural Production of the country. 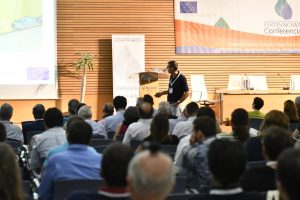 Juan José Magán, of the Cajamar Foundation, during his speech.

The experts invited to the session today recognised that to incorporate new technologies into fertigation management, they must adapt to the needs of each grower. “We cannot talk about drones to a grower who does not even have an accountant; incorporating new technology is a ladder to climb step by step”, according to Carlos Campillo of CICYTEX, who has stressed the need to fill the knowledge gaps that currently impede the transfer of new technologies to rural areas.

The capital investment required for fertigation technology is currently the main obstacle for growers, preventing them from modernising their equipment, in addition to the belief among growers that they do not need to improve, and that there is no technology capable of meeting their specific needs. Rodney Thompson, from the University of Almeria (UAL), explained that Almería is transitioning towards a more sustainable agricultural model thanks to the design of new tools that will allow the accurate measurement of water and fertiliser needs. “If these tools are not used and are not incorporated by the grower into good irrigation practices, it will be impossible to move forward,” according to Thompson.

Also today, Dutch growers spoke about the ever more demanding regulations being imposed on them related to the quality of their wastewater. Wim Voogt, of the University of Wageningen, and Kees van der Kruk, of PRIVA BV, emphasised that the elimination of nitrate pollution is currently the most important challenge faced by Dutch growers, since the objective of the Dutch Government is to achieve zero nitrate emissions in irrigation water by the year 2027.

FERTINNOWA is a thematic network focusing on the transfer of innovative techniques for sustainable water use in fertigated horticulture. For this purpose, FERTINNOWA collects, exchanges, displays and transfers best practice and innovative solutions for more efficient water and nutrient use to reduce the environmental impact associated with fertigated fruit and vegetable production systems. For the project, a direct link with growers and grower organizations, irrigation communities, policymakers, NGOs, environmental and consumer organisations is essential. All are part of the External Advisory Board of FERTINNOWA, a consulting body to give advice throughout the project and evaluate its results.

The FERTINNOWA project receives European funding within the framework of research and innovation promotion initiatives included in the Horizon 2020 program. Spanish participants include the Andalusian Institute of Agricultural and Fisheries Research (IFAPA), Fundación Cajamar, University of Almería, Center for Scientific and Technological Research of Extremadura (CICYTEX), Navarra Institute of Technologies and Infrastructures Agroalimentarias SA (INTIA), and the Valencian Institute of Agriculture Research (IVIA). In addition, public and private organisations related to agricultural research and innovation from Germany, Belgium, Slovenia, France, Holland, Italy, Poland, the United Kingdom and South Africa participate in the project.

One thought on “Press release: FERTINNOWA promotes the exchange of more than twenty innovative fertigation technologies between European regions”